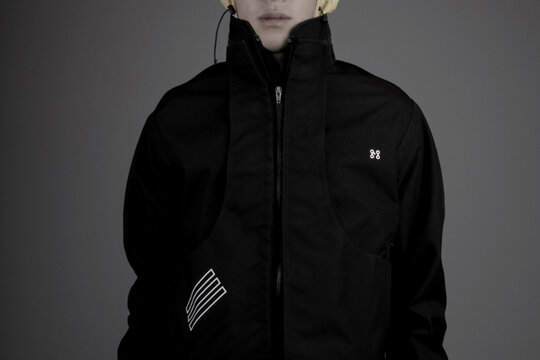 Tap your jacket to start the beat; swipe to change it; raise your arm to raise the tempo – that’s how music is made on the Machina Midi Controller Jacket. That’s right, it’s making music with your body.

Machina’s (pronounced Ma-chee-na) MJv1.0 is the first product to come out of the Mexico City-based design group. The jacket allows the wearer to control music with their bodies. Fueled by a Kickstarter that raised more than $77,000, Machina has set out to build wearable technology, or what it calls: “the wearable machine.”

Machina was formed roughly 15 months ago. Antonio Machina, the group’s fashion designer and creative director, wanted to make and wear more mechanical clothing. It was this desire for clothing that was more practical, more personal, and more unique that led Machina to their philosophy of the wearable machine.

The MJv1.0 comes with four flexible sensors that allow the jacket to detect finger position, an accelerometer to detect arm movement, a joystick, and four buttons on the side. The idea behind the MJv1.0 is that all of the sensors – and really the jacket itself – can be configured to work for any purpose. This means that the wearer can use the jacket to control a computer, PC programs, or gadgets.

“Most of us are firm believers in free software, and DIY, and care deeply about political issues and (h)ac(k)tivism,” Machina's website says.

True to its style, Machina has a T-shirt that was made with photoluminscent ink. The T-shirt features anonymous heads whose brains glow in the dark, or as Machina put it, “The brains light up the darkness of ignorance.” They also worked on different jackets at the same time as the MJv1.0. Their Kickstarter gifts included a hoodie made from silver cotton, designed to protect the wearer from electromagnetism.

“We want to be the first massive wearable-tech brand that makes wearable technology that’s modifiable and is conscience about technology,” says Mr. Fernandez de Cordova. Machina prints a series of T-shirts that advocates free information and free software. Some of the T-shirts, for example, call for the end of SOPA and CISPA, two bills that have come under fire from Internet advocates for handing over too much power to copyright holders and the US government.

“We need to fight for freedom of information, source code, and the right-to-privacy,” says Fernandez de Cordova.

People can buy the MJv1.0 jacket at the "early-bird" price of $285 from Shopstarter.org. According to Fernandez de Cordova, the jacket will retail for $400 in stores. Machina makes each jacket by hand, which elevates the price. Despite its many components, the MJv1.0 is washable. You charge the jacket through a USB port.

Machina’s MJv1.0 is set to ship in November.

via The Christian Science Monitor